The drive through the Scottish Highlands is filled with some of the most picturesque landscapes we’ve ever seen. Enormous lochs (lakes) reflected the sky, infinite green rolling mountains, and waterfalls. 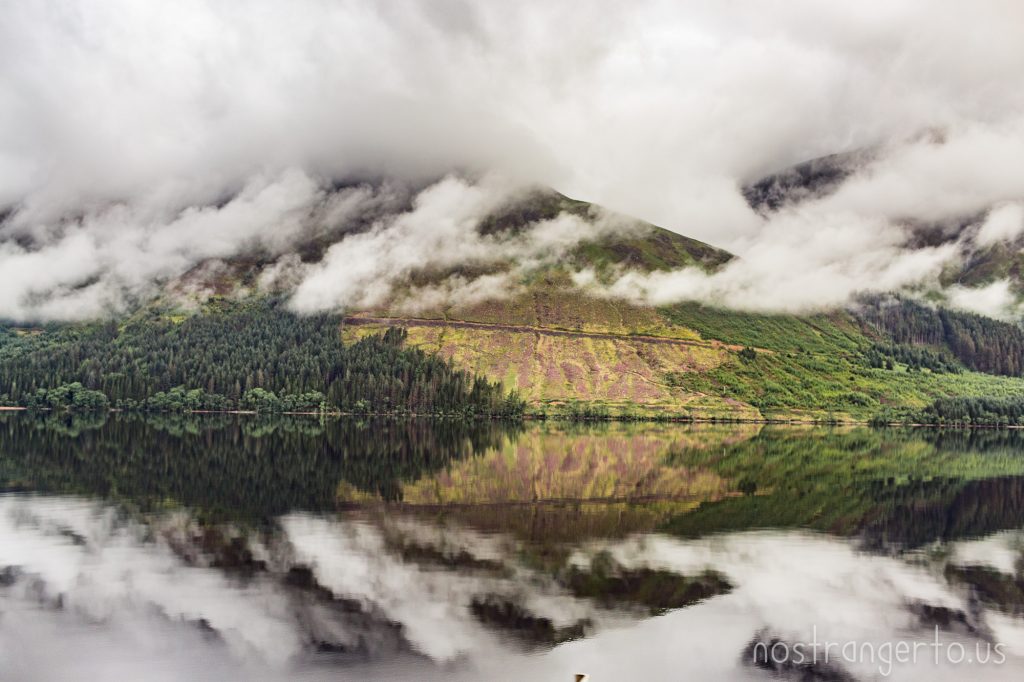 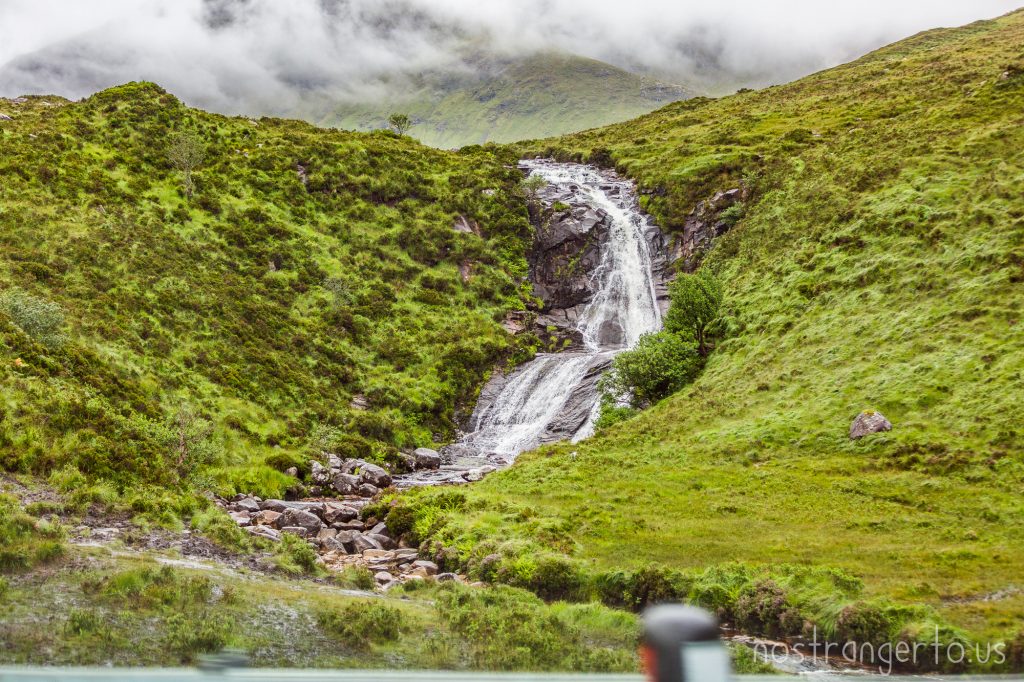 Urquhart_Castle’s history can be traced back almost a millennia to the Picts, early settlers of Scotland.  Supposedly a Pict King was converted to Christianity here by St. Columba from Iona.  The castle was built in the 7th Century and them intentionally blown up by the British at end of the 18th century to keep the Jacobites from overtaking it.  It sits on the edge of Loch Ness, providing a unique view out over the water. 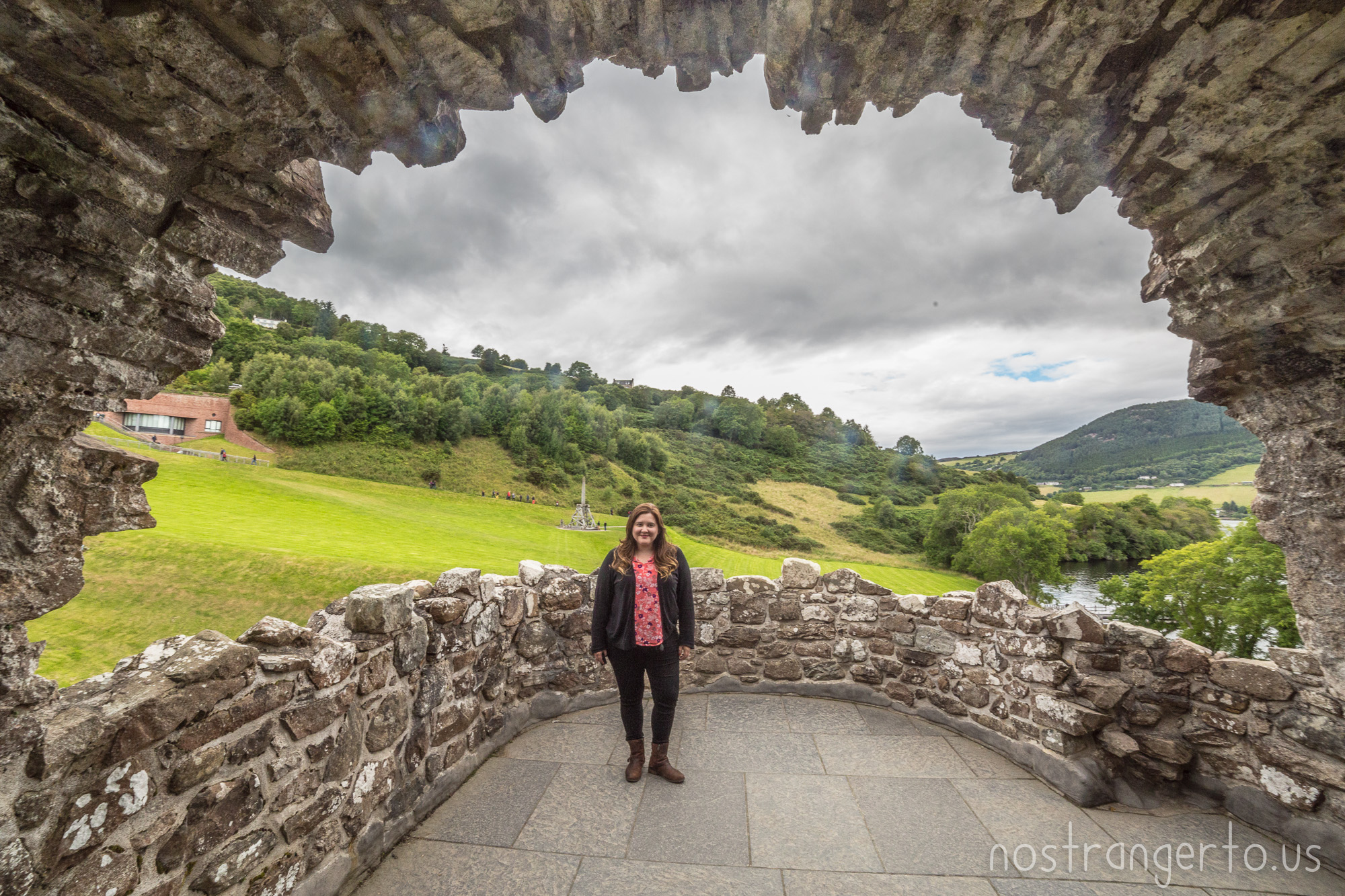 River Ness runs though the town of Inverness, in the Scottish Highland, which is equal parts historic and hip. Inverness is also on the northern coast of the Great Glen Fault. This fault line formed most of the Lochs over 300 million years.

We ate at The Kitchen Restaurant which was an unplanned treat. If you can believe it, we fought over the last piece of pickled herring (if you can believe it!) and shared a fabulous duck entree.  We then got gelato at Miele’s Gelatoria, they even have non-dairy options.  Finally we ended the night with a few half pints of the local beer at Black Isle Bar.  It was a real treat to sample the micro-brew culture of the Scottish Highlands.

Clava Cairns are ancient Bronze Age burial sites, shaped like a slabbed letter C.  (C is for Cairn, that’s good enough for me.) The other edge is large boulders that hold the larger stones.  They are about 1.5 meters high and about 30m in diameter.  They are found all other the Scottish Highlands and Ireland as well. 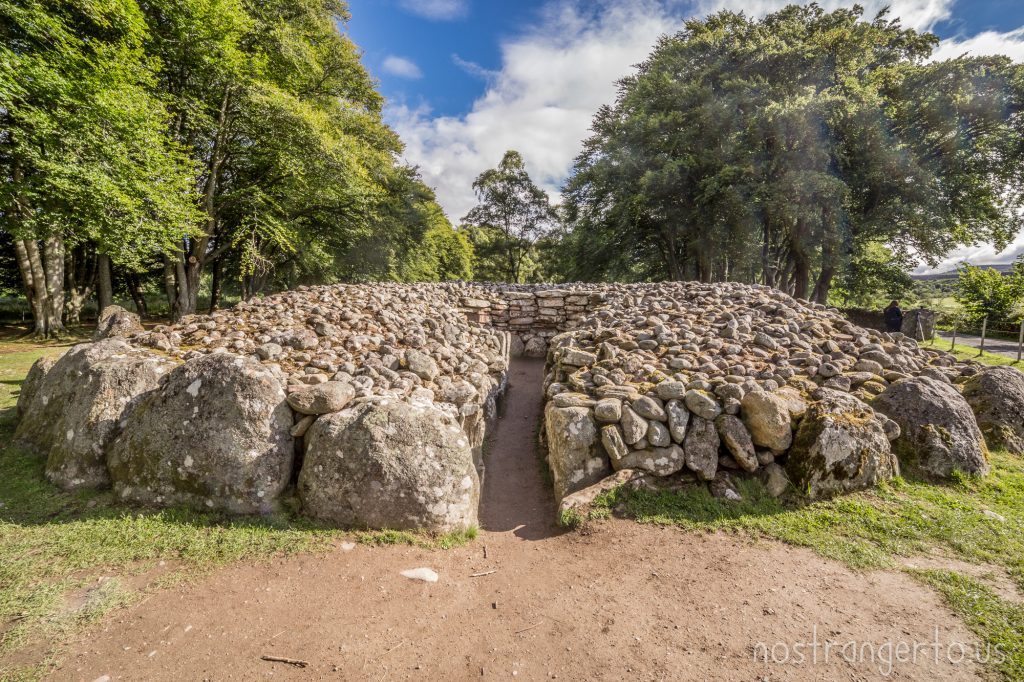 Culloden Battlefield was chalked full of history about a tragic last stand in what could be described as a British civil war.  The Scotsman that fought for the insurgency of Bonny Prince Charlie were ill prepared to fight against the heavy artillery of the British government.  Yet they bravely and tragically fought the lost cause anyway, which is why it is romantically commemorated.  The show Outlander tells the story of the highlander clans from the perspective of a time traveling doctor (no, not THE Doctor, that’s a different show).

Stirling is just south of the Scottish Highlands, so please forgive us from including in our “Highlands” post.  It might have been our favorite town, it is filled with history yet light on the tourists.  The old town sits on a hill, with Stirling Castle on top.

For our anniversary dinner we when to the Stirling Highland Hotel and had a lovely 3 course meal. The big surprise was that Juliette and selected the location because of one unique feature.  Their building used to be a high school and in 1888 an observatory was added to house a one of a kind telescope. Cooper was thrilled to photograph this awesome little rotunda with rotating roof.  Although the hotel runs tours, only the Stirling Astronomical Society can use the telescope to star gaze.  It is worth coming back one day. 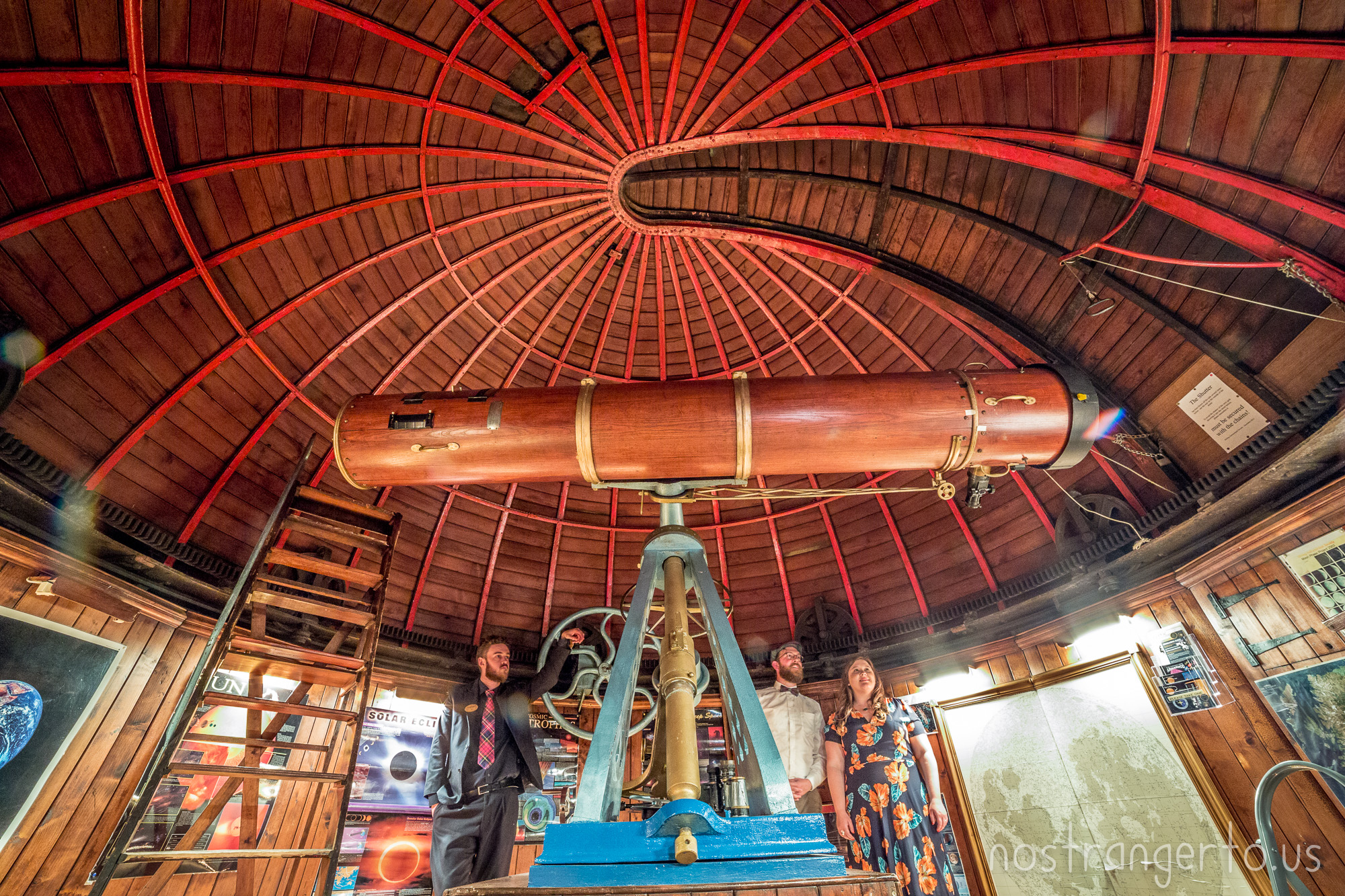 Another treat for pop culture geeks was our visit to Doune Castle, Deanston. You might recognize it from Monty Python and the Holy Grail (if so, according to the very comedic woman running our guest house, you are probably male).  Otherwise, and more recently, the castle can be seen in the TV show Outlander as well as Game of Thrones. Visitors are given complimentary headset guides narrated by the Python Director and historian Terry Jones.  Outlander fans on the tour are occasionally treated to the dulcet tones of the historical heartthrob Sam Heughan.  Come early to this castle to get the best experience, sans large crowds.  Be warned, you will run into at least one “Thrones-er”, “Sasanach”, or Knight that says “Ni!” 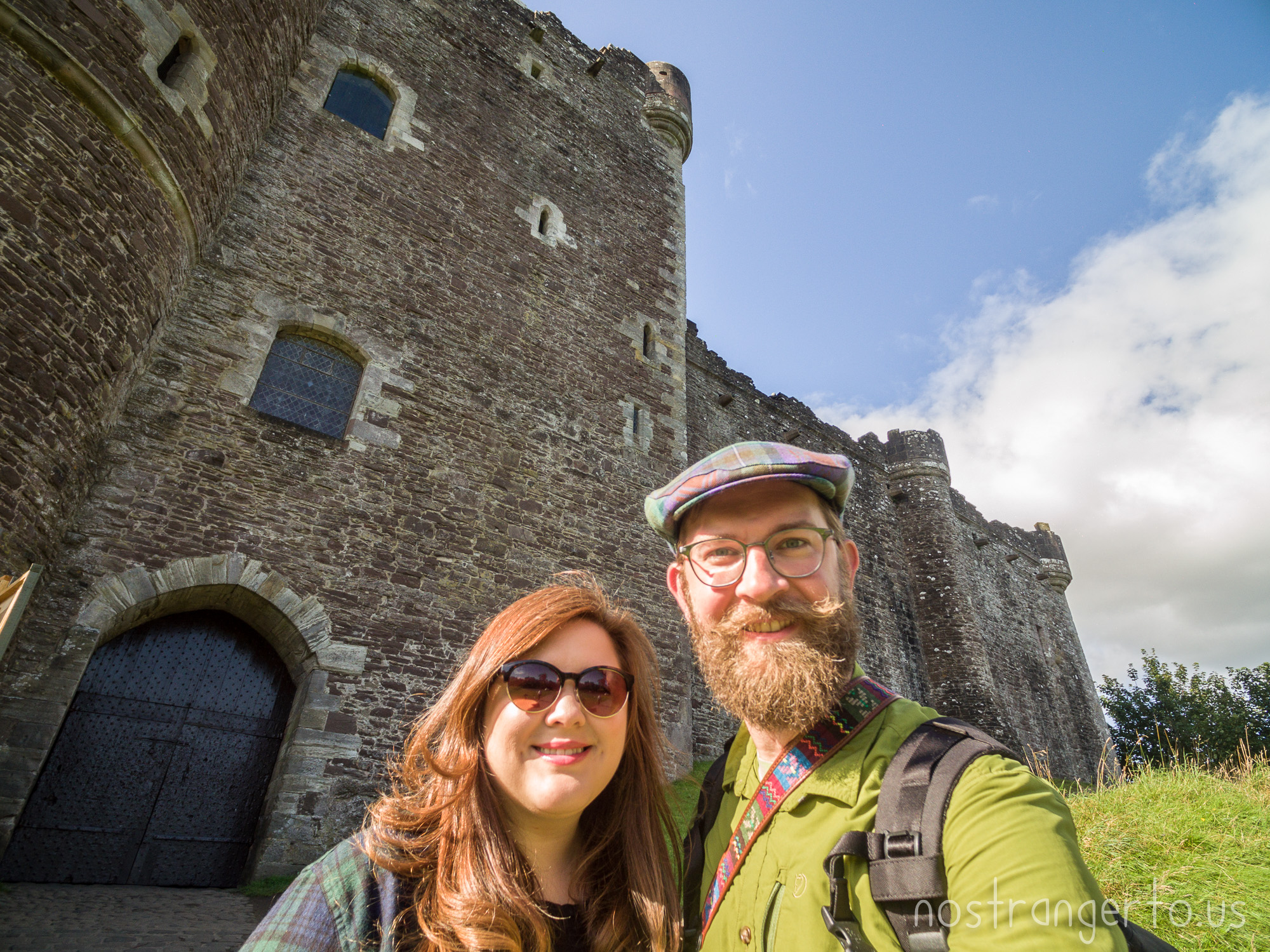 We recommend taking a tour of the Deanston distillery, if the spirit compels you, since it is very close to Doune Castle. 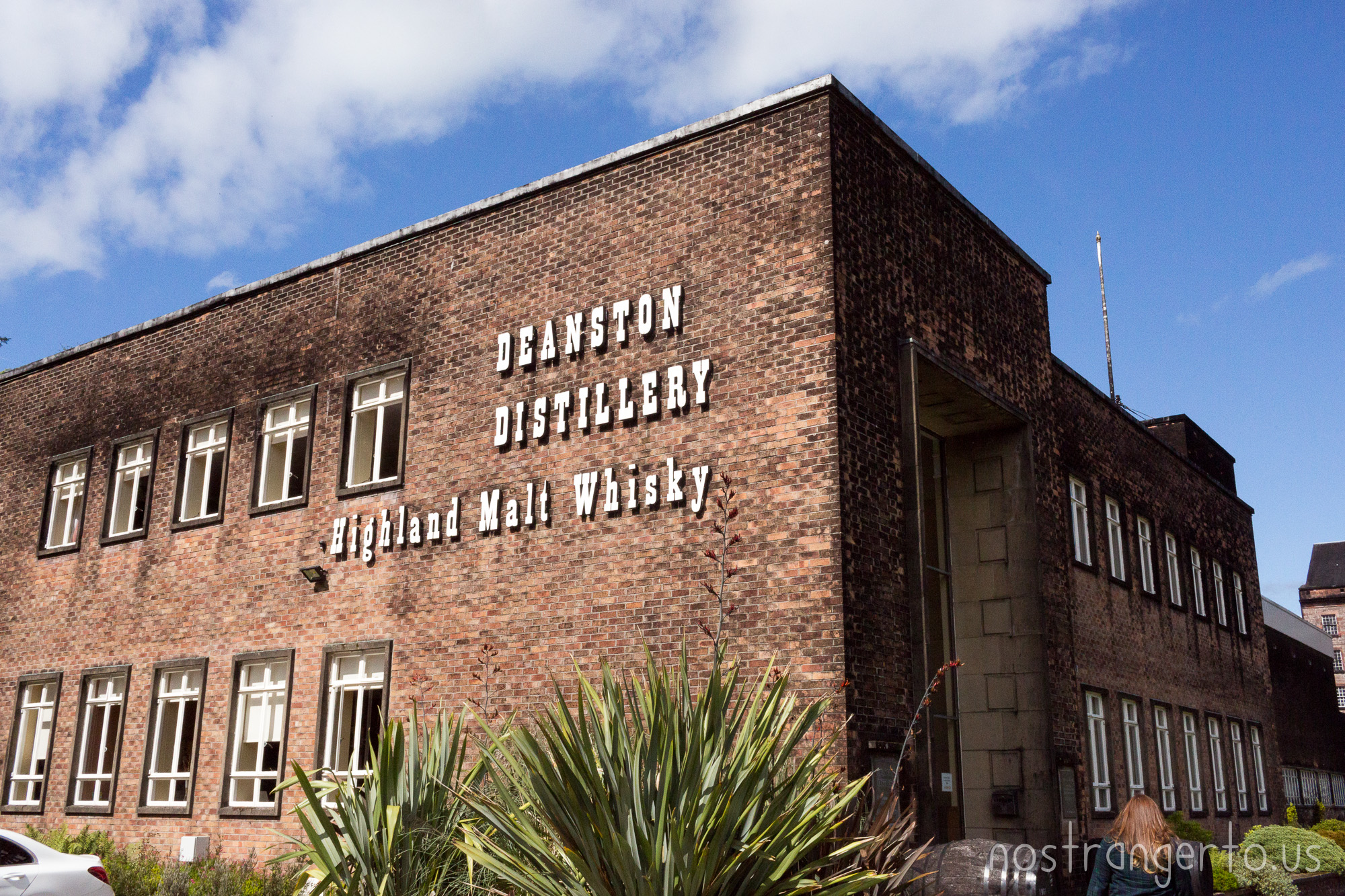 Not only did we get to taste a dram or two but we also got to see the entire facility, including the aging room.  Deanston may be the only distillery in the world that relies solely on its own renewable power generation.  The facility had previously been a cotton mill, built in 1830, that harnessed the flowing water of the adjacent river Teith to run turbines.  After a few upgrades the plant now generates enough energy that the distillery only uses 25% of it, the rest feeds the grid!

Airth castle is a funky hotel in Airth.  There we met Wallace McIntosh, an old English Sheep Dog. He ran right for Cooper, who was tickled purple! 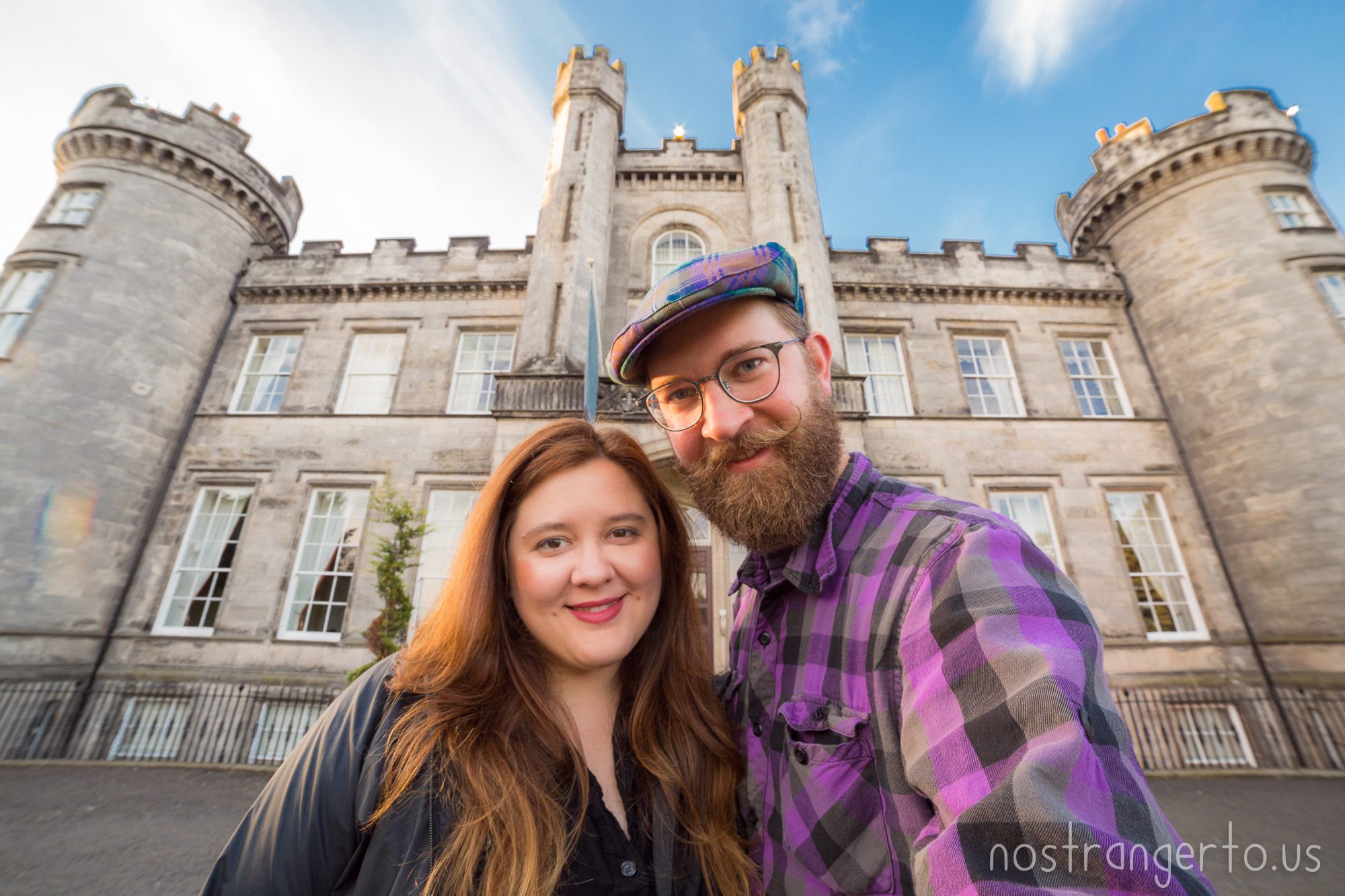 Our final stop was in The Helix in Falkirk at sunset.  There we admired the grand modern horse sculptures known as the “Kelpies”.  Kelpies are a mythological creature know for taking the form of a horse and feared for dragging their victims under water.  Luckily these Kelpies just lit up and remained inert.  It was the perfect end to an amazing tour of Scotland.

Check out our Video Production Company: Demonstrous Productions
« Going to Skye and the Hebrides | Scotland