The second leg of our Scottish vacation took us to the majestic Isle of Skye, made famous for being featured in the James Bond film Skyfall. We set out from Fort William and took a gorgeous drive seeing the most picturesque landscapes. Enormous lochs (lakes) reflected the sky; infinite green rolling mountains hugged both sides of the road.  When we rolled down the windows you could hear waterfalls crashing along rocks.

(Our First Days in Edinburgh)

Our first stop was in the sweet, small harbor town of Portree. We used it as a home base, staying at the Portree Hotel in the center of town. We drove out to nearby sites including, the Old Man of Storr, The Fairy Pools, and the Fairy Glenn. 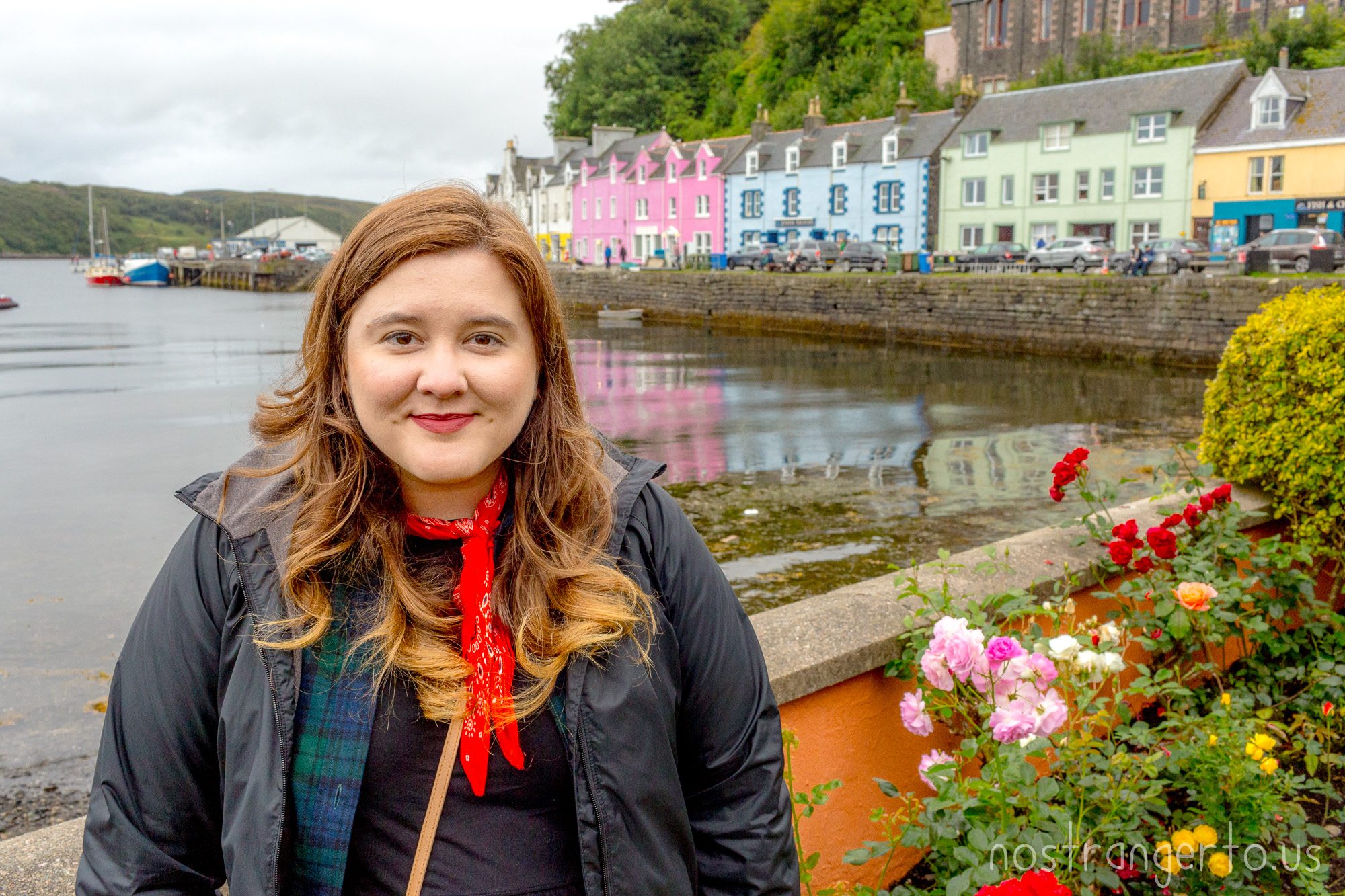 We went to the elusive Old Man of Storr in the Trotternish peninsula. We hiked for about two hours into the mountains hoping to see the natural formed stones. Patience was key because for most of our hike the stones were covered by a think mist. After exploring and testing our new drone, the Old man finally revealed himself, but only for a few moments.

Next we made our way to Mealt Falls and Kilt Rock which stands at 90 meters allowing for a magnificent view of the north-eastern cost of the Isle of Skye. Kilt Rock is made of dolerite Jurassic strata rock, that’s right this part of Staffin hosts the most impressive collection of Scottish dinosaur remains found along this coast!

Our second day in the Isle of Skye, we took an early morning boat ride on Stardust Boat tours in hopes of seeing some native wildlife. 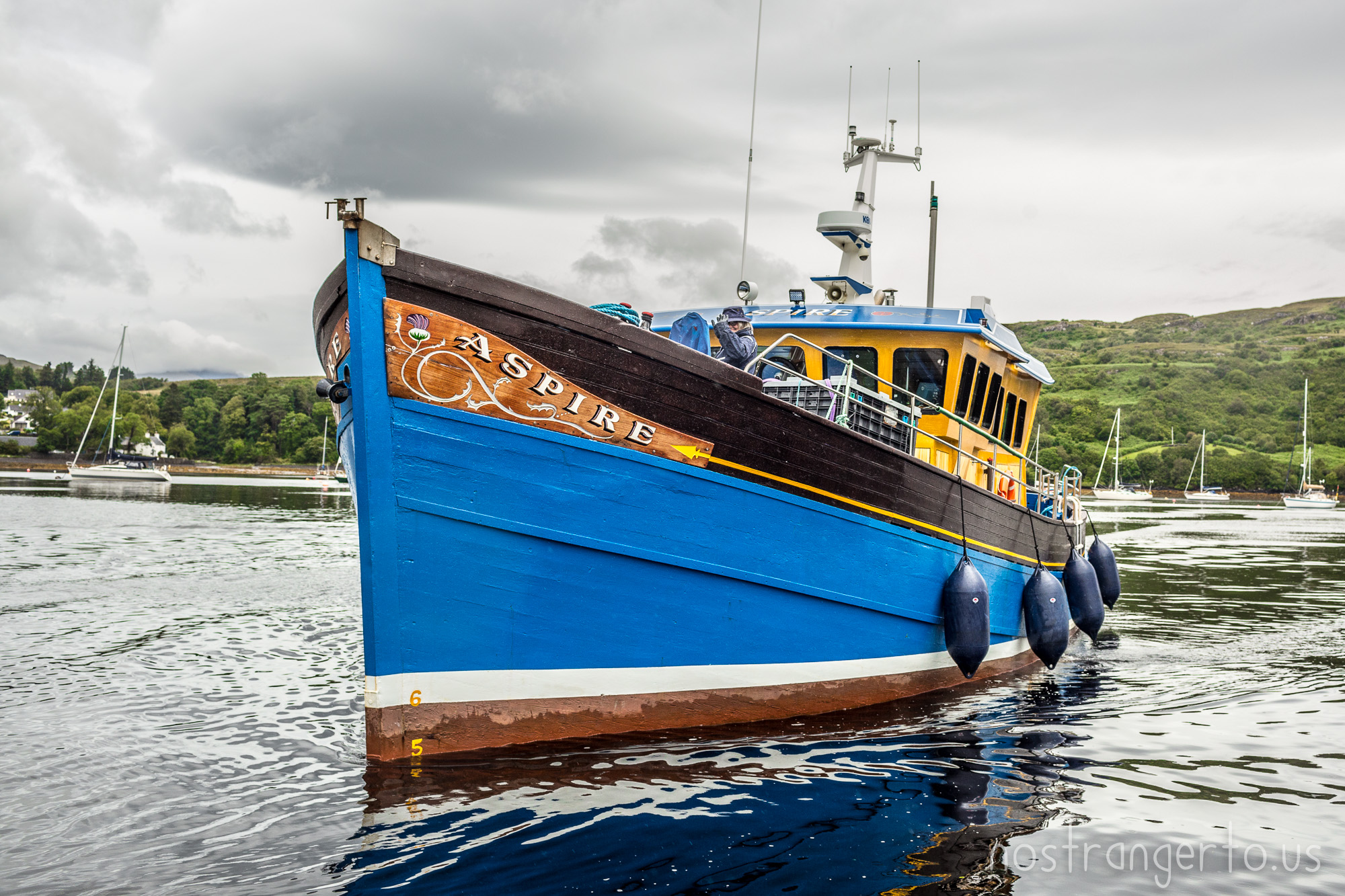 We made our way out around the Raasay Sound in search of golden eagles and seals. Even with a long lens it is challenging to see golden eagles because they blended in so well with the scenery. 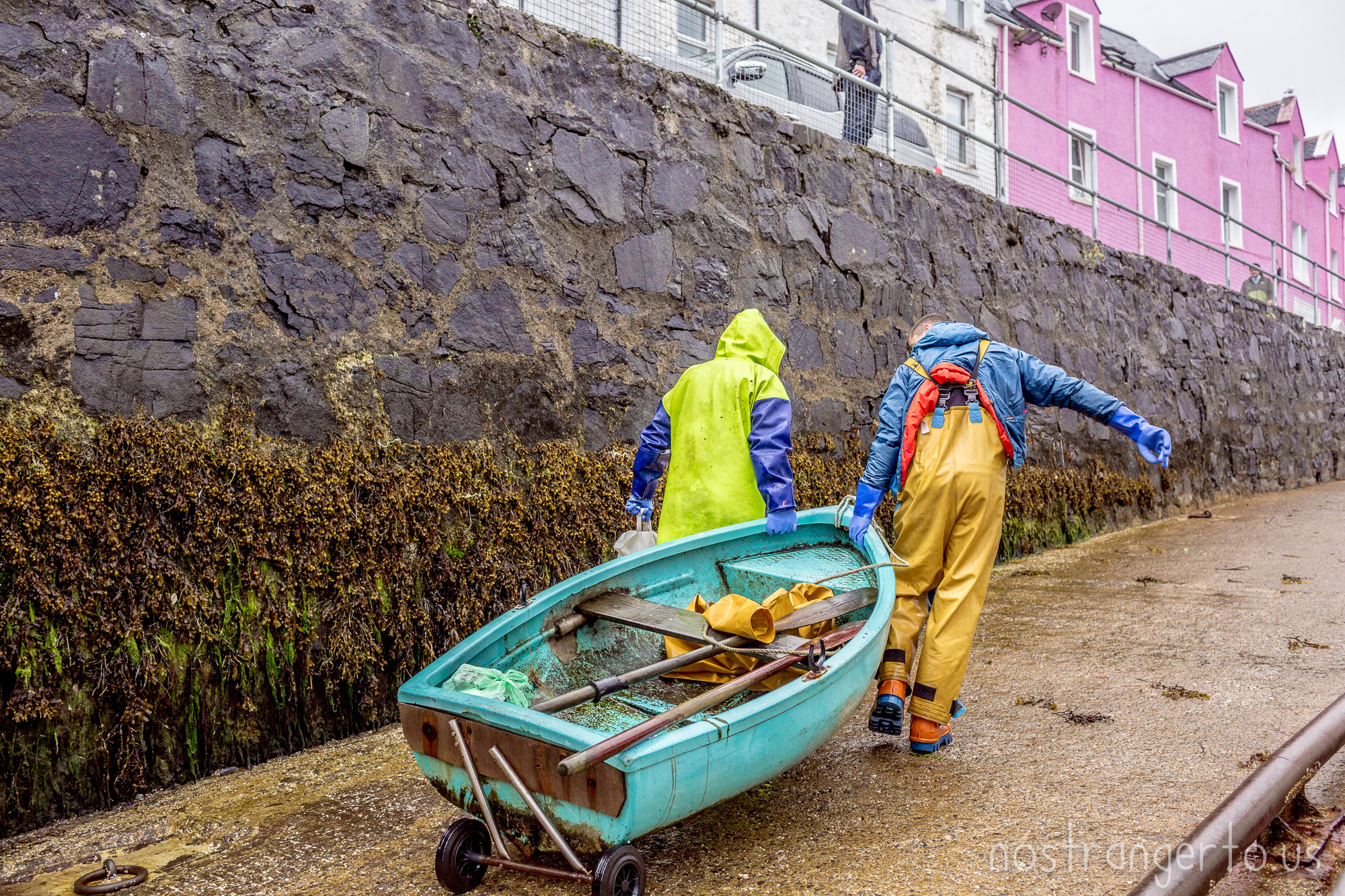 The natural waterfall known as the Fairy Pools boasts vivid blues and greens and are the habitat of a variety of animals. When we were hiking the tourist friendly trail we spotted two golden eagles mating in the sky. 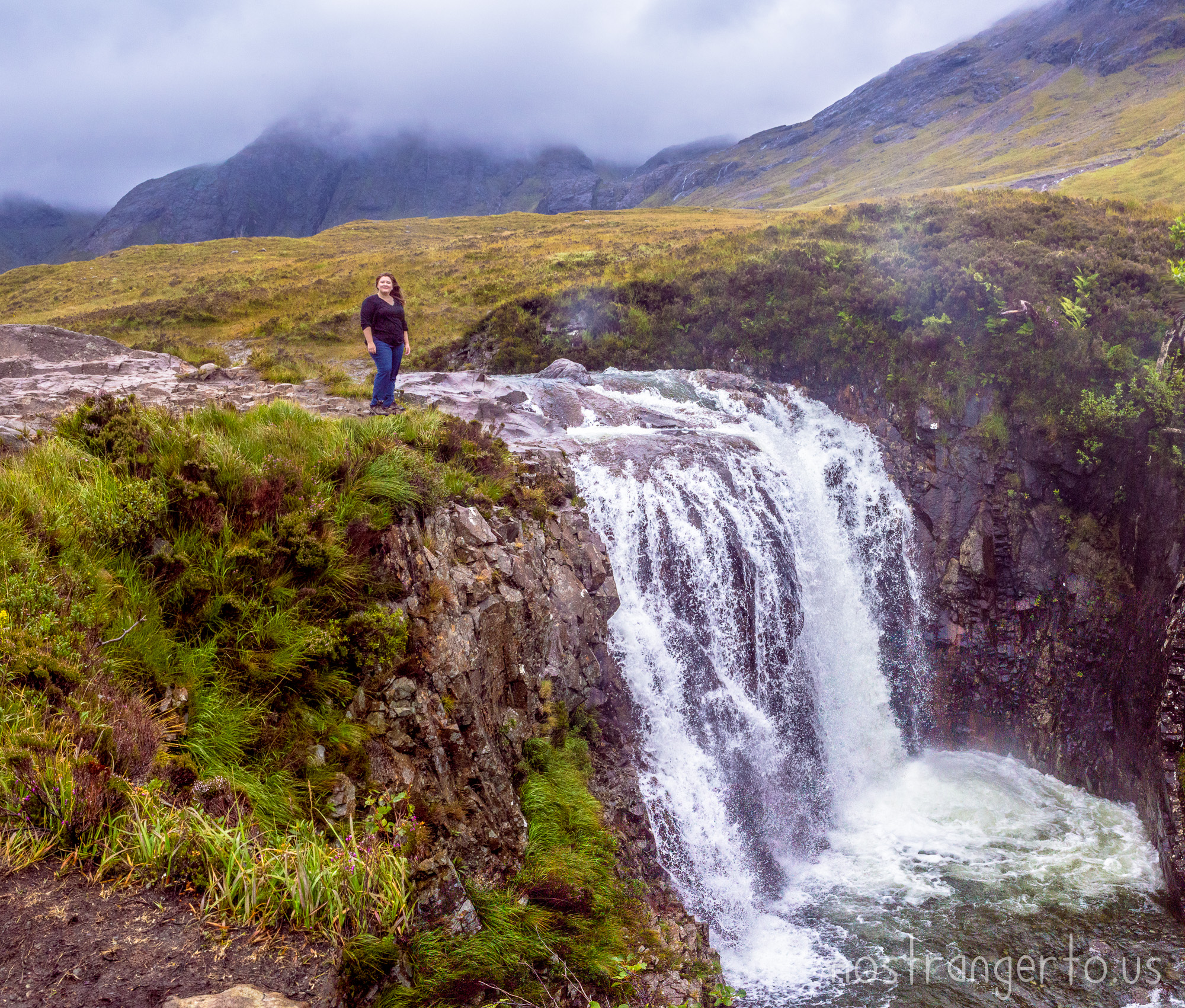 Continuing our search for mysterious fairies, Juliette drove to the small hamlet of Uig. There, just outside the little harbor town is the magical Fairy Glenn. A landslip in miniature and a winding road leads visitors to a breathtaking view of rolling hills.

One of our favorite places to visit on our Scotland trip was the Isle of Harris and Lewis. We drank gin, made friends with the locals and honored Scotts of the past by visiting the ancient standing stones.  Ferry goers are met by the distillery when they roll into the port. 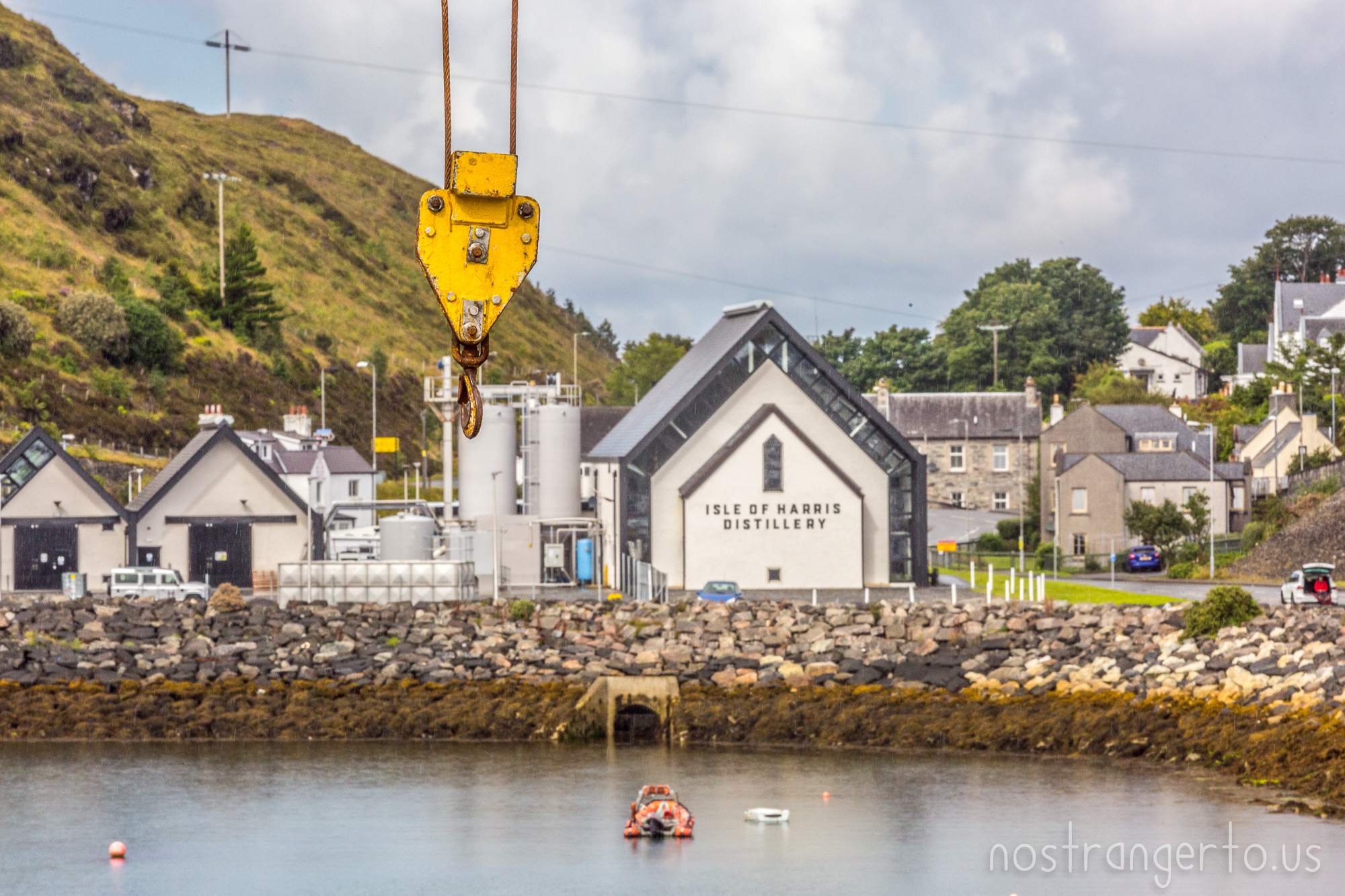 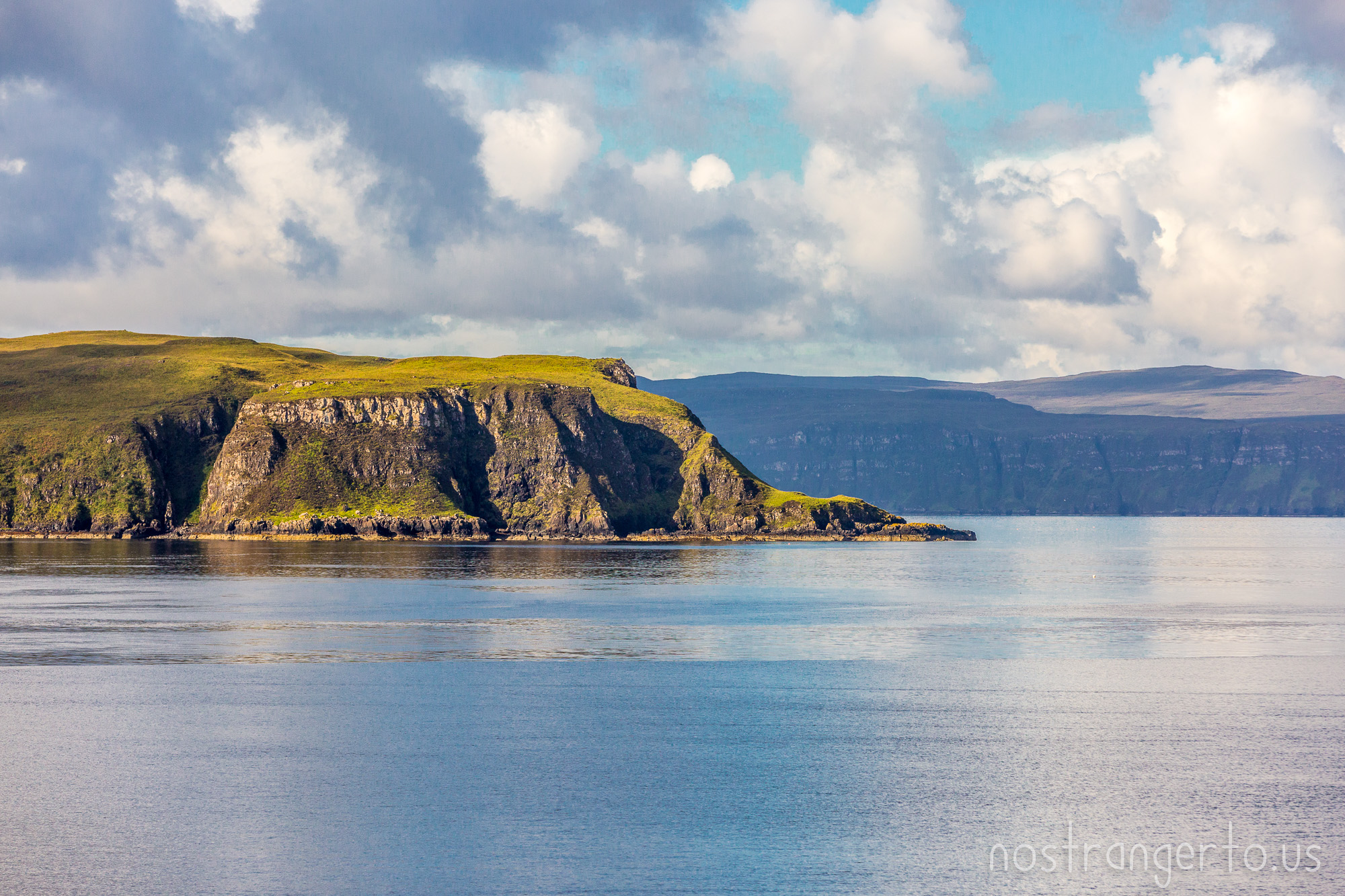 We took a lovely ferry ride (Juliette’s new favorite thing!) and enjoyed beautiful ocean views. The Harris Gin Distillery was right next to the ferry so even though it was early in the morning we went ahead and visited and tried some delicious G&Ts! 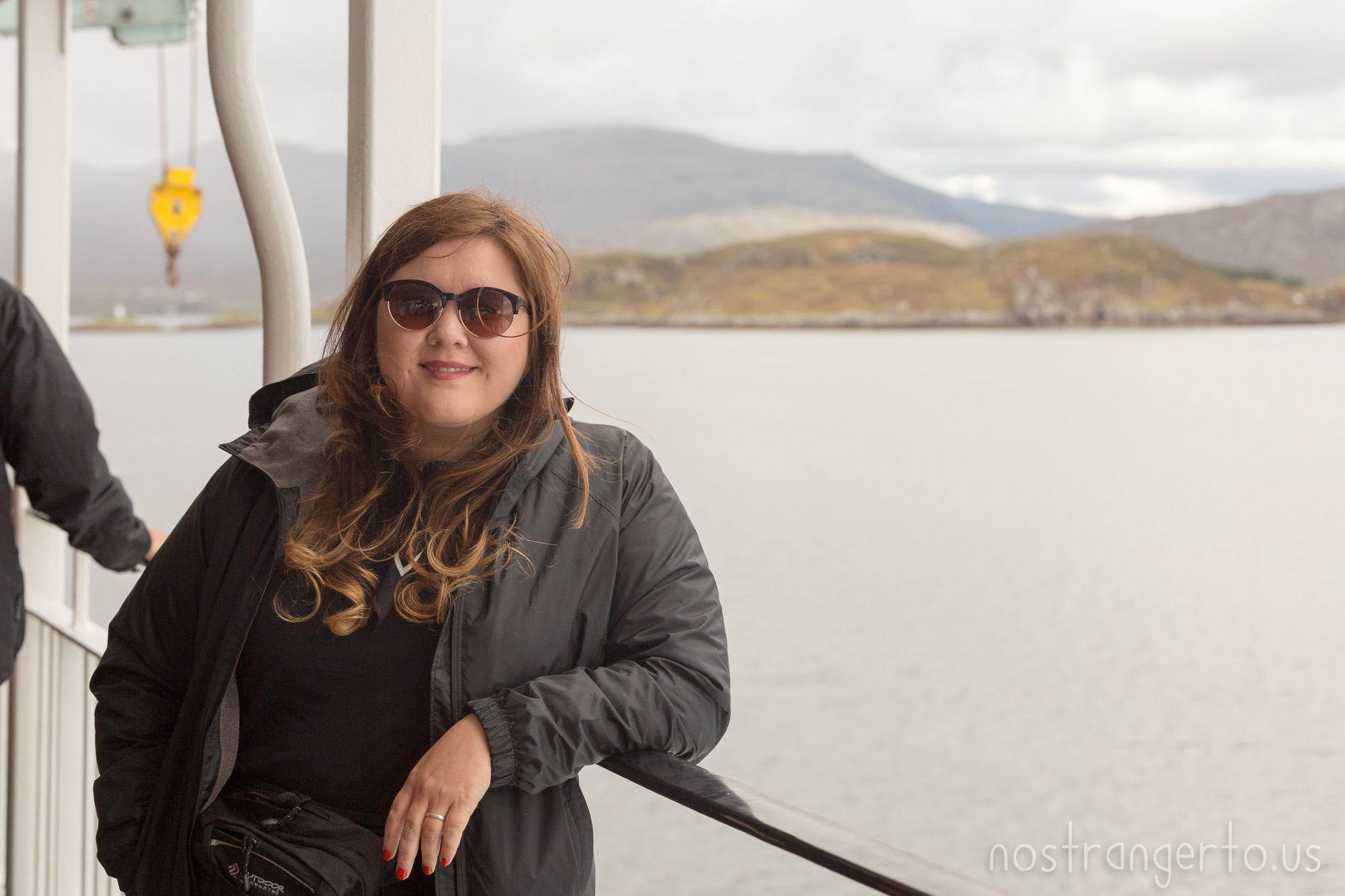 Driving around the island was breathtaking. We rarely saw other people as we made our way along the countryside. Juliette was on a mission to see the neolithic Calanais standing stones made famous by the show Outlander.  Be careful not to touch the center stone because you will likely travel back in time. Travellers will find other stone monuments commemorating various clans, mountain climbers and Jacobites throughout the Isle of Lewis.

The Calanais stones were a focus for ritual activity during the Bronze Age and now make a great place for selfies! 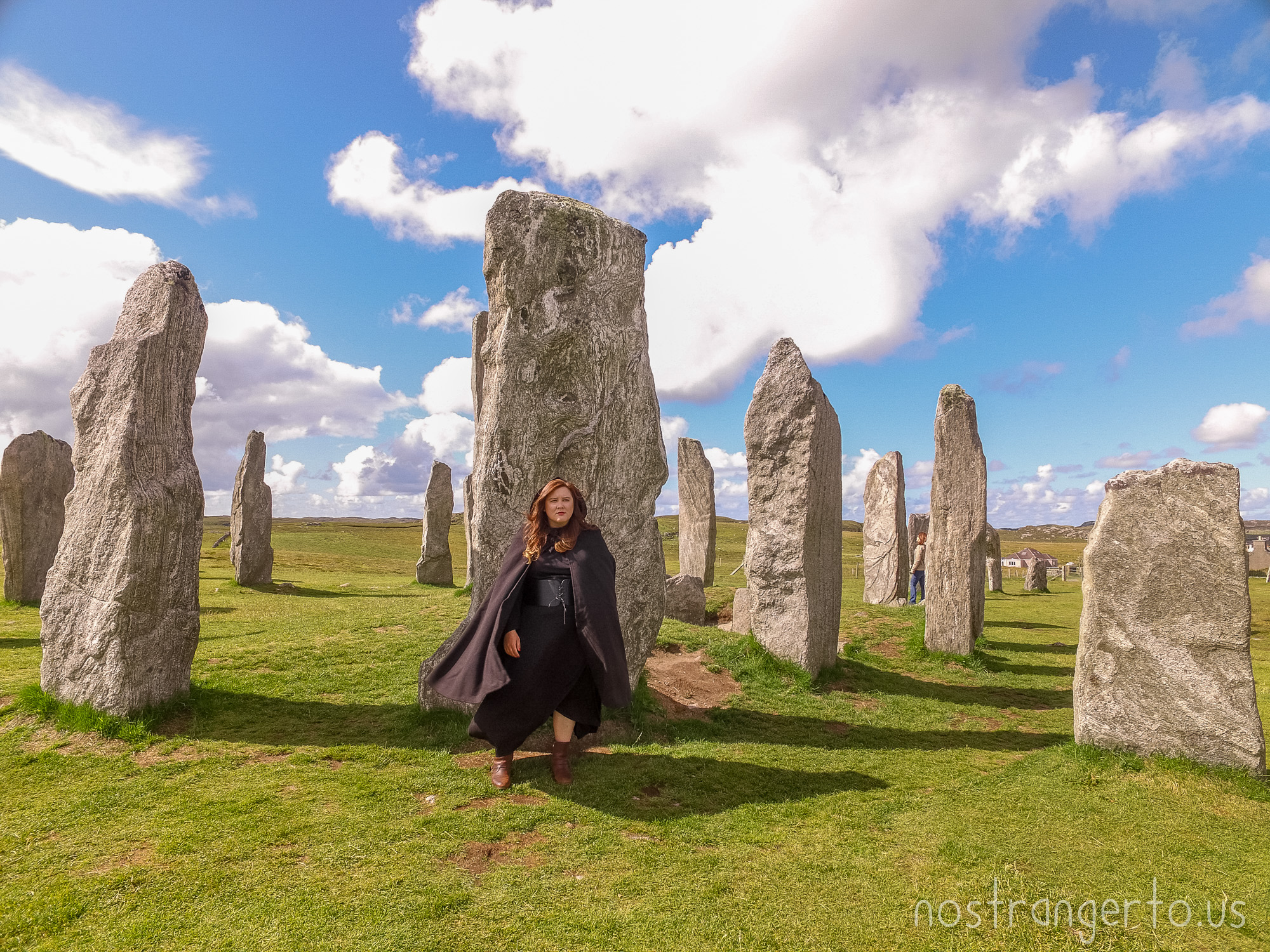 The Stones create a circle pattern of thirteen stones with a monolith near the middle. Five rows of standing stones connect to this circle. Two long rows of stones running almost parallel to each other from the stone circle to the north-northeast form a kind of walkway.

There are shorter grouping of stones to the west-southwest, known as Cnoc Fhillibhir Bhig (aka Callanish III) that we visited.  We were greeted by a herd of cows that were tending their calves.

All of the stones are all the same rock type, most likely from the same quarry. Over the years the site was used as a burial site, then in the bronze age it may have been used for farming. Others believe that the stones hold power and that they are monuments used for rituals therefore they hold a special significant to the locals.

Our Scotland trip be continued in an upcoming part III.